Fighting and speaking are the same, in my mind. 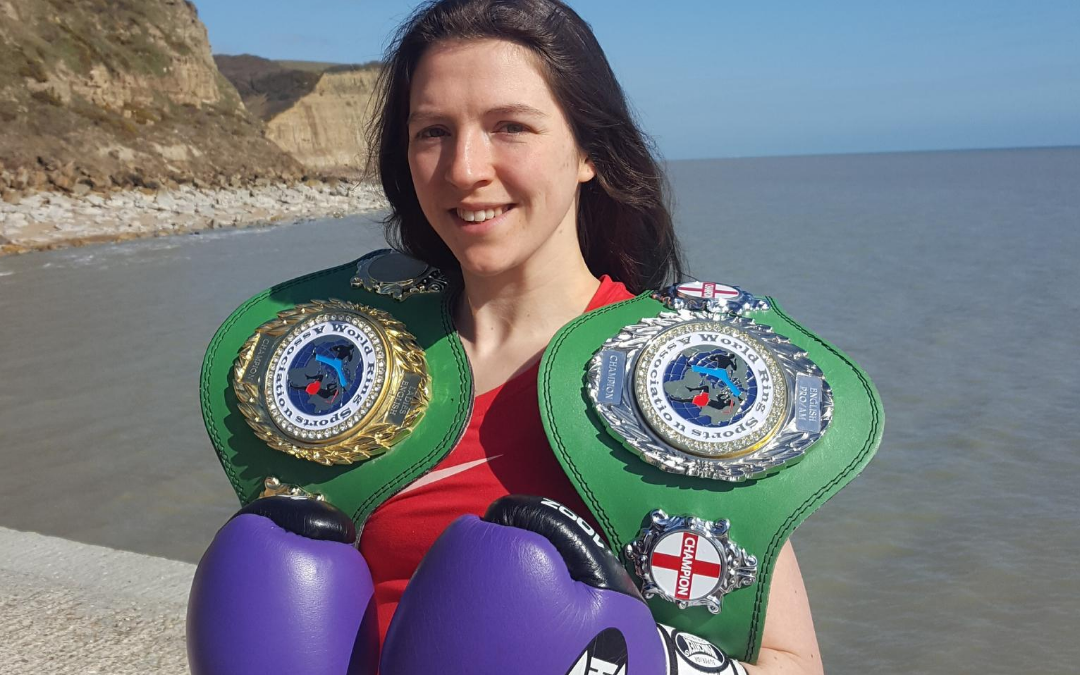 I will speak on stages globally.
I’m not there yet, I’m still in the sparring rounds and the sports halls… (early/lower level kickboxing fights are in sports halls before you progress to ‘better’ venues, such as night clubs).
With those pre-fight nerves and wondering how those who have ‘been there and done it before’ made it look so simple!
The answer is practice.
And with practice comes an inner belief in one’s own ability!

I’m a 2x English Kickboxing Champion but my journey wasn’t easy.
My goal of global stages is running more smoothly because I have learned how to manage my mindset.

I have found that there are a great number of similarities between fighting and speaking.
My ability to overcome the struggles to become a champion has allowed me to channel that feeling, that focus, and determination, into my ‘training’.

Like any skill, I don’t expect to walk on stage tomorrow and just ‘be great’. I am putting in many hours of practice. I am in training… a speaking version of ‘fight camp’.

One of the biggest differences is that I am learning to enjoy that practice. Treat it as play! Purposeful play.

I go live on Facebook almost every day. Multiple times per day, some days. With no prior planning about what I’m going to say; turning up, openly and honestly me…
I used to get nervous but now I do not. I embrace the opportunity. I ENJOY it. A way of communication, a chance to learn, and to improve…

This is the same for sparring, funnily enough.

Facebook lives and sparring are fundamentally the same thing, in my mind.
Both skills, which I practice, leading up to the ‘main event’.

With ‘speaking on stages’ and ‘fighting’ being what all the practice is for.

Essentially there is little difference, between the practice/play versions of these activities and the ‘main event’ versions, except the pressure to perform, the being judged… and the mindset.

I spent many years beating myself up, in my mind, about my sparring. Never being good enough.
Telling myself that everyone is bigger than me, stronger than me… fitter than me.

Bigger and stronger, perhaps. Fitter, no.
And in the ring, they were not bigger or stronger than me, either.

But, the voice inside my head had repeatedly told me so.
So, this is what I believed to be true.
And those negative, self-limiting, beliefs carried with me into the ring, and through my fights…
Combined with the adrenaline… the panic, is it surprising I lost?
I was fighting not just my opponent but my own mind too…

It was when I overcame those voices that I began to believe in my ability, that I became a champion.

And since then, my confidence has continued to grow.
As, I have been able to carry that mindset across all other areas of my life; my coaching, my hypnotherapy, my speaking… even my selfie-taking!

Having that inner belief that I will succeed has allowed me to progress with my speaking much faster than I did with my fighting.
Having that inner positivity allows me to focus on what’s going right, instead of everything which is wrong! (I do still analyze everything, to improve. But not in a self-deprecating way!)

Having that inner champion allows me the confidence to continue to pursue my dreams.
And continue to fight the fear along the way, remembering that I am Fighting Fit.
No more fighting myself, there are enough battles to win along the way, without creating my own!

Do I still compare myself to other speakers? Yes… There are so many out there who are better than me… but, now I use that as inspiration! If they can do it, I can too… as long as I put the work in.

You don’t win fights, and you don’t speak on stages globally, without putting the work in.

And do you know what I am most looking forward to?

Being able to treat sparring as PLAY.
I haven’t sparred properly for nearly 9 months now, but I know that when I return I will have improved.
Because my mindset has improved.

I may not be physically fitter, faster, or stronger, but I have certainly not lost any skill. I’m a 2nd-degree blackbelt and I coach kickboxing at least 4 times per week…
My belief in my own ability has increased, and that is powerful!
Combined with being able to relax into it more, creating greater focus and clarity, not to mention enjoyment… I know it’s going to be fun!

Fun that I never allowed myself, when I was too busy beating myself up.

Did I enjoy fighting? That’s a tough question. I enjoyed pushing myself to the limits. Improving.
And I most definitely enjoyed becoming a champion – that first title fight was incredible; I was ‘in the zone’! For the first time, I entered that fight with confidence. And I knew I would walk away as the champion.

And that is the feeling that I now take with me, into every talk, podcast, or presentation I give.

I am grateful that I have had this time to work on myself. By removing fighting as an option, I had to turn my attention inwards. To work out exactly who I am, how I became the fighter I am, and how to move forwards positively, taking the lessons learned along the way, and taking each small step towards success.
A success which will allow me to better help others!

My kickboxing, including my fighting, was always for personal development.

Now I have many other ways of personal development too; reading, writing, and speaking, for example.

My personal development benefits those I coach too.

I am a fantastic coach.
I always knew I was good, I allowed myself to believe that one positive.
But now my self-esteem is higher than ever, I can better help you increase yours. Or anyone who needs my help.

I am done fighting and I’m ready to be in your corner!

P.s Will I fight again, in the ring?
Who knows, I’ve yet to decide. But I do know that I will treat it more as ‘play’ and I will not be fighting myself!

Let’s have a virtual coffee, or tea, and cake too if you fancy, together!